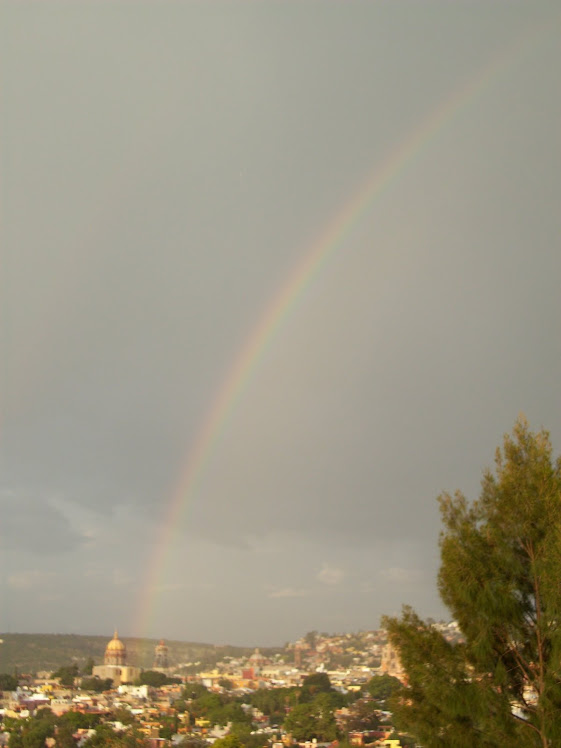 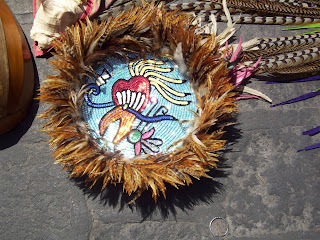 "Those who take no part in the making of world division by ideology are ready
to resume life in another world, be they of the Black, White, Red, or Yellow race.
They are all one, brothers, sisters. The war will be a 'spiritual conflict conflict with
material matters. Material matters will be destroyed by spiritual beings who will remain
to create one world and one nation under one power, that of the Creator.' That time is
not far off. It will come when the Saquasohuh (Blue Star) Kachina dances in the plaza."
**BOOK OF THE HOPI

Two tsunami dreams in
March, April 1999, my dream
notebook confirms, the heaving
of Earth beneath our feet, my

youngest son and I, then the
sound of gathered, sheer power,
I've not ever heard before. In
the dreams we stand in the One

Place, a place of safety... Tupkya,
safe place, in my dreams. We
watch surfers, people die in
the mountain of water, we weep,

we don't turn away, we witness
the devastation, we hear the
Twins of the North, South Poles,
of Earth's vibratory centers,

call out warning, call out sorrow,
call out Spider Woman's name,
"Kokyangwuti," Mother of All Life,
in my dreams I hear them-

and she calls out to Taknokwunu,
Spirit who controls the weather, but
it's too late, it's begun, the shift
of axis, the shift of worlds,

the shift of powers, the gathering of
sheer power, the ancient Earth
opens her eyes slowly, the
ground trembles, shudders, dances

awake, trembles, shudders, dances us
awake- so much death, so much
sorrow, the hidden is revealed,
the ancient Sipapuni, the center of

all life, the Place of
Emergence. What will emerge,
we ask, what will emerge,
what do you weave, Spider Woman?
* * * *
We must build a Tipkyavi...womb,
symbolic shrine, altar, for
our Earth, our womb, our mother-
we must bring objects sacred to

all fruit, the dried umbilical
cords of our beloved children,
all children, every Turtle Island,
every human color, the human

race, every mother's womb as
witness to this birth, the gush
of birth waters, the upheaval
of our earth, flesh, earth, the

Yes, bring this too, life, to Tupkya,
safe place, Sipapuni, Place of
Emergence, the small hole in the floor
of the Kiva, crown of your head.
* * * *
Poqanghoya, Twin of the North Pole,
Palongawhoya, Twin of the South Pole,
hold us in your powerful hands, as
our beloved Earth rotates her

new axis, her new dance, her
new birth, her eyes slowly
opening, waking up, she observes
us, the Sipapuni at the crown of

push us through her birth canal,
earth upheaval, gushing waters,
the ancient Sipapuni will guide
us if it's open, open our eyes

to terror's wonder. Hold us in
your powerful hands, beloved Sacred
Twins, send out your song, the
Tangakwunu, rainbow.
* * * *
Santa Fe, New Mexico, Indian Market (2004),
I stop to admire a young Hopi man's
Kachina carvings, so beautiful,
so perfect, I freeze in the hot

sun, he laughs, bringing my eyes to
his, sheer play, sheer joy, sheer
creation, his mother's son,
I've seen this look in my

own son's eyes, I laugh
with him. "Your Kachina's are
so beautiful, it's like they're
alive." "They are,"

he smiles the smile of the creator.
I buy a small butterfly Kachina,
suddenly he grabs my right hand in
a firm clasp, turning my arm/hand

over, mine on top of his- flash of
smile, creator's eyes, "This is
how we will know each other in
the next world, sister, the Nakwach."

I'm stunned, his firm grip, without
my permission, his mother's son, my
own sons, I breathe, "I don't
understand, what?" He holds my

gaze- "My people, the Hopi, call
this the Nakwach, remember it,
you'll need it in the next world,"
he laughs. "Show me again," I

smile, he does. "Thank you, I'll
remember, for the next world."
I walk away, slowly, looking
back, waving, my small butterfly

by, I see bright yellow pollen
wings, now now, and think of what
I read this morning (2011)- the traditional
Japanese greeting replaced with,

"We are
all in
this together."
Nakwach,

this is how
we'll know
each other in
the next world, Nakwach.

Dear Saquasohuh, Blue Star Kachina,
we will know you
in the next
world, give

me your terrible,
wondrous hand,
we are all in this
together. Nakwach.

**The quote that opens this poem comes from Frank Waters' BOOK OF THE HOPI ('Hopi Prophecies'), the words and wisdom which he gathered from 'some thirty elders of the Hopi Indian tribe in northern Arizona.' He lived with them during the gathering, the gift of their words, ancient knowledge, for this amazing book. Waters writes in the Introduction: "Most of their spokesmen here are old men and women with dark wrinkled faces and gnarled hands. They speak gutturally, deep in their throats and almost without moving their lips, their voices rising out of the depths of an archaic America we have never known, out of immeasurable time, from a fathomless unconscious whose archetypes are as mysterious and incomprehensible to us as the symbols found engraven on the cliff walls of ancient ruins...This, then, is their book of talk. It is not a professional paper- neither a sociological or psychological study nor an anthropological report. It is the presentation of a life-pattern rooted in the soil of this continent, whose growth is shaped by the same forces that stamp their indigenous seal upon its greatest mountain and smallest insect, and whose flowering is yet to come." 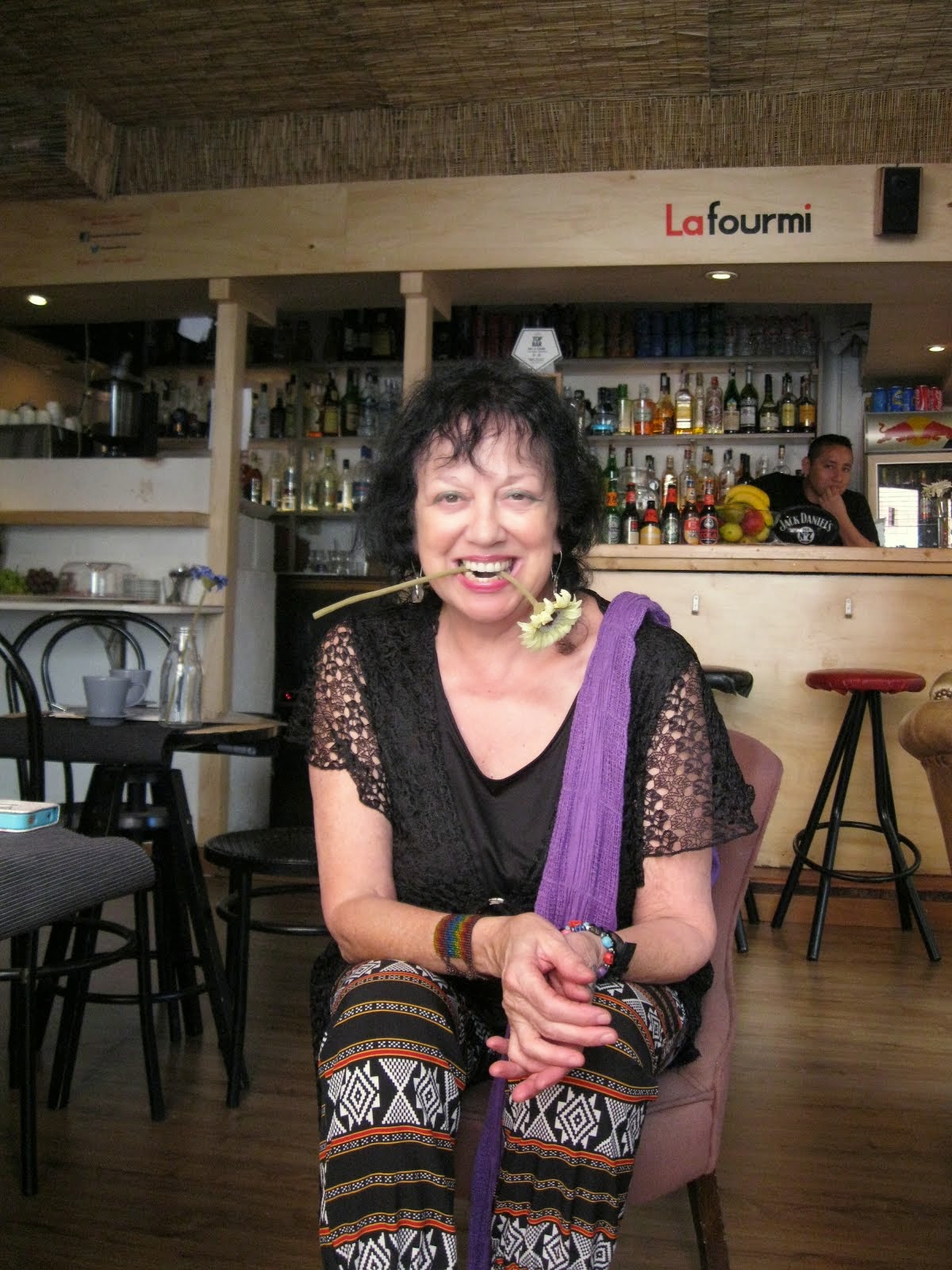 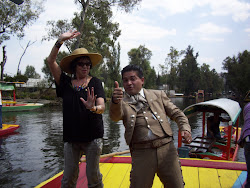 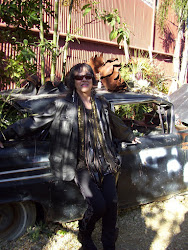 Plants, trees, growing out of oil based car, YES... 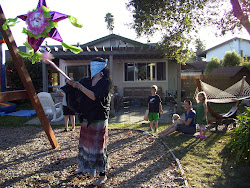 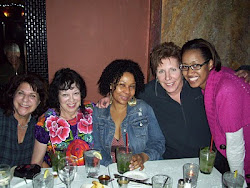 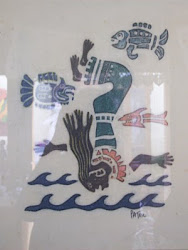 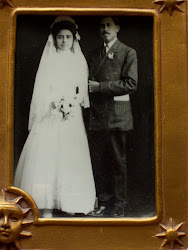 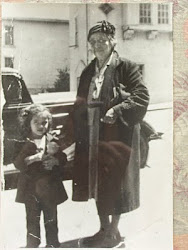 Mi abuelita, Jesus Villanueva, and me...she used to tell me, in Spanish, never spoke Engish (I was her translator)- "If you have one drop of Yaqui, you are all Yaqui, niña." 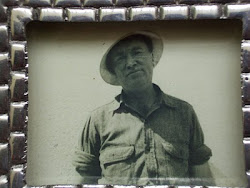 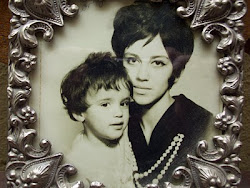 My daughter, Toni, at three- me at nineteen... 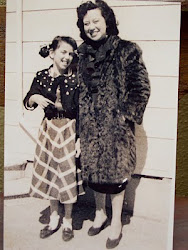 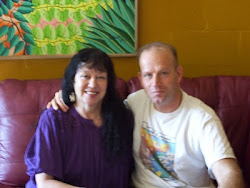 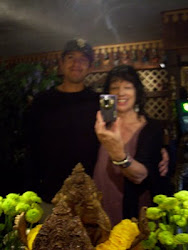 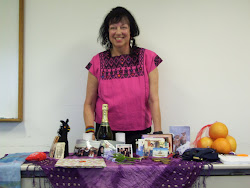 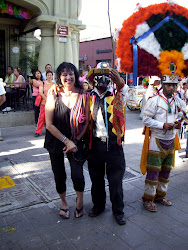 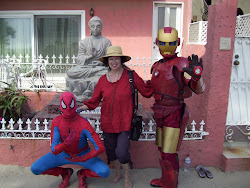